When bad printers show up, print-over-RDP doesn't work, and GPO is clear
article #1459, updated 175 days ago

OK, so we have that problem increasingly common, a 64-bit server, trying to serve a printer to 32-bit client machines, or vice versa. It took me a while, but here are two different methods I have needed, depending on situation.

First, see if current drivers are downloadable for this printer in the server’s mode (bit-width). If they are, we are able to use method #1, which is probably preferable, although method #2 may still work too. Here’s method #1:

If you cannot use method #1, or if there are no downloadable drivers for your printer, we go to method #2:

Does not seem to have a web page of its own, it is linked from others:

Recently there was a case where a Windows Server 2016 print server was set up, and very odd things happened vis a vis one particular large MFP: When any non-admin user changed printer settings on her/his PC only, those settings were replicated to all users on all PCs who had that printer. Microsoft printer deployment was doing it somehow; testing was done both using Print Management and the other GPO print setup method, same result. When manual mappings were used to replace the deployments via Windows Explorer, the symptom went away.

Thus the CMD script below. It can be run as administrator from a PC or remotely via psexec, or a variety of other ways. It installs the driver into the PC, and via scheduled task, any new user that logs into the PC, will have his/her own new mapping to the printer.

Get rid of the new Windows-controlled default printer setup
article #1225, updated 1409 days ago

Windows 10 has some sort of automatic thing built in which is pretended to read our minds and decide for us which of our printers should be the default at any time. Needless to say this makes no sense at all, and causes lots of user frustration. To turn this off with Group Policy, browse to:

and set “Turn off Windows default printer management” to Enabled.

From Windows 7 on, Microsoft has thoughtfully provided us with VBS scripts for command-line printer management, here:

In this dot on the globe, we go to the following system folder to see them all, there are several:

There are multiple ways to set printers up by group policy in Windows. There is a printer administration role which can make things easier or harder, depending on how well everything is working. The simplest way, is to open the Group Policy Management Console from a domain controller, open up an appropriate policy, and open it to here: 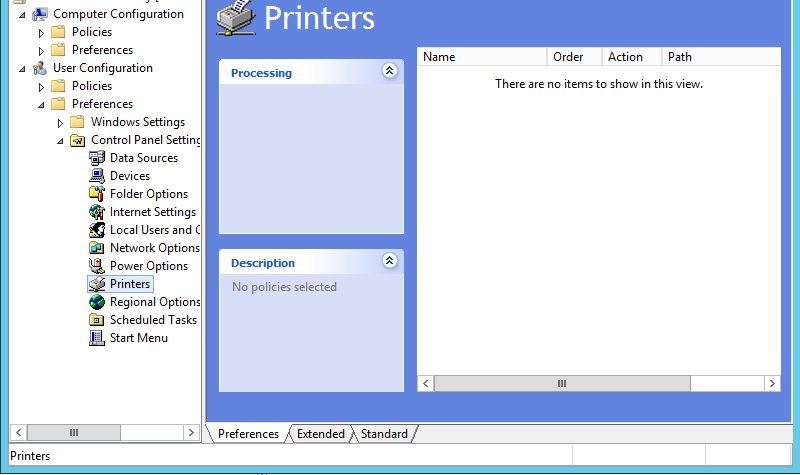 then right-click in the white box, you’ll get a menu, choose “New”, choose “Shared Printer”, Action should be “Update” or “Replace” if “Update” doesn’t work, and you’ll choose the printer by “Share Path”. You can leave everything else alone unless you need something special. Sometimes it works better to do a Delete and then Create for each printer. The vagueness here is due to unknown but widely experienced vagaries in behavior of Group Policy which are addressed in no known documentation.

Please do note that we set these up under “User Configuration” not “Computer Configuration”. It is possible to do it under Computer, but removals can be far more difficult if we do, there have been messes seen.

If there is a Canon MFP, and the desire is to implement user codes, you need more than just a driver. You need the current UFR II sort of driver, and very significantly, you need something called the “Canon Driver Information Assist Service”. This is in the “misc” folder in the driver package, it’s called DIAS for short. This is a service which makes network user codes flow from desktop to server to MFP. Without it, you will get errors as user code lookup attempts fail.